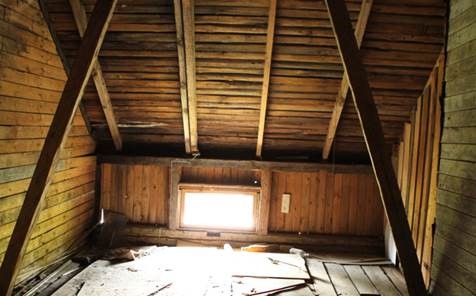 Mark Hughes and Bahareh Nasiri from Aalto University answered five questions about the use, classification and recycling of timber in Finland. They also considered demolition of different building types in Finland.

Q1) How commonly is timber used in the load-bearing elements of Finnish buildings?

According to Karjalainen (2018), wooden multi-storey constructions were prohibited in Finland until 1997 due to the fire risk associated with the use of wood-based products. On 11.9.1997, the revised fire code version, RakMK E, resulted in permission being granted for the construction of residential and office buildings with wooden frames and façades up to four storeys high. On 15.4.2011, the building regulation (fire code) was revised to allow the construction of apartment buildings up to a maximum of eight-storeys under certain conditions.

Overall, around 3 million dwellings were in existence  in Finland at the end of 2018. Amongst the 3 million dwellings, there are 1.379 million apartments in multi-storey apartment buildings. 43 residential multi-storey construction projects with timber frame and wood façades were completed in Finland between 1996 and 2018. In these projects, 82 buildings corresponding to 2365 dwellings were constructed.

Q2) What are the characteristics of wooden buildings demolished in recent years?

In general, studies on the demolition of buildings are limited. However, in Finland Huuhka and Lahdensivu (2016) conducted a study on demolished buildings. Their study showed that between 2000 and 2010, single-family houses comprised a significant share amongst all buildings demolished. In terms of the year of construction, the majority of demolished houses were constructed in the 1940s and 1950s (during the ‘reconstruction era’) or the early 20th century. Translating that the buildings constructed in the early 20th century have longer lifetime in comparison to the building constructed in 1940s and 1950s.

In addition, logs were used mainly for the construction of buildings up to a maximum of two storeys. According to Jeskanen (2000), until the end of the 1940s in Finland, log construction was the most popular form of construction for wooden residential, public, and commercial buildings. The majority of these log houses had up to two storeys. In this system, the walls act as the load-bearing structure. They are made of large-size or solid wood elements and the elements are usually placed with a maximum span of seven meters. The wood products used in log houses are solid wood and the longest logs can be found below and above openings.

In earlier times, prefabricated elements were not available for log houses and all the construction work was done on site. The walls in log houses were prepared by a carpenter and the diameter of the logs for the walls typically ranged from 200 to 300 mm. After standardization, industrialized log elements were used in log houses. Industrially prepared logs are uniformly machined or made square using a plane. The diameter of industrial round logs varies between 130 and 230 mm and industrial square profile have dimensions between 70 and 270 mm.

Q3) How relevant is wood waste from construction and demolition activities in Finland? 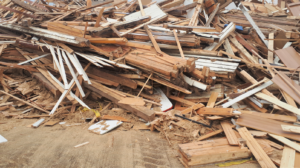 Q4) What are the factors affecting the quality of wood waste in Finland and how is wood waste classification implemented in Finland?

Wood waste is sorted according to the classification system introduced by Alakangas and Koponen (2015). This system classifies waste arising from construction and demolition as belonging to the following classes: A (chemically untreated by-products and residues), B (chemically treated by-products and residues), C (recovered fuel) and D (hazardous waste).

Wood recovered from construction is categorised as class B and recovered waste from demolition, such as structural components and logs, belong to category C. Impregnated, recovered wood is classified as category D. Class C recovered wood, which has the potential for recycling, needs further investigation to identify chemical hazards, biological degradation and mechanical damage. Wood waste that is free of chemical hazards and biological degradation is chipped for energy recovery. In the current system, energy recovery is also considered recycling. The reuse of recovered wood or, the production of recycled products, is very low in Finland.

Q5) Why is information on the quality and quantity of recovered wood important?

Increasing interest in the use of wood in buildings and its limited supply potential from forests have brought into focus the importance of the sustainable use of wood products in buildings. All timber and timber products ranging from structural timbers to primary and secondary processed products have a carbon storage potential.

In the Nordic countries, including Finland, the long tradition of wood use in buildings has resulted in a large accumulated stock of wood in current buildings. When buildings are demolished, currently the wooden products are directly converted into waste wood and used for energy generation. However, this material could have greater value and be reused to substitute virgin material or be used in new applications before being used for energy generation.

The reuse and recycling of recovered wood could be an alternative way to reduce the harvesting of primary wood and waste generation.  Sakaguchi et al. (2016 & 2017) studied the potential quality of wood elements arising from a demolished building through a case study in Finland. The result of these studies demonstrated that the wood recovered from a demolished building is different in terms of quality and appearance and this variation derives from the first application in which the product functioned, as well as the cross-sectional dimensions of the wood product. Interestingly, it was concluded that the wood used in exterior cladding has good potential for cascading.

To validate the results of Sakaguchi et al, further work should focus on potential reuse and recycling by studying several demolition projects. This is because reliable data concerning the quality, availability and quantity of wood recovered from demolition is currently scarce. Such information could be useful for the grading of recovered timber as well.